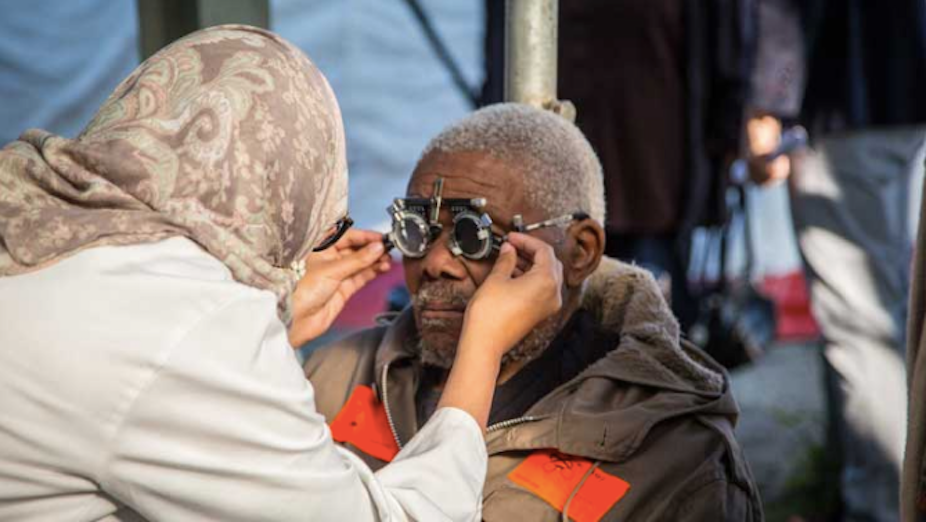 In my first stint as a medical volunteer, in August 2018, I travelled to South Africa from the Vision Sciences department at Glasgow Caledonian University to work on the Phelophepa Train – a mobile medical clinic travelling all over the country to provide healthcare in rural areas.

With just one doctor for 5,000 people in these remote areas, the train started as an eye clinic with three coaches in 1994. Later it expanded to a 16-coach operation funded by health and social justice organisation, the Transnet Foundation and the University of Johannesburg’s optometry department. Today, with 40 permanent staff and numerous volunteers it provides eye, dental and psychological care, as well as cancer, diabetes and HIV screening and vaccinations, and has treated 23.5m people in quarter of a century.

The train stops for five to 10 days in each place, covering 36 rural areas each year, and is funded by international sponsors such as Roche, Colgate and South African Airways. In 2012, a second train – Phelophepa II – was launched to respond to the increasing needs of some of the most deprived areas in South Africa.

Seven years ago, I decided to become an optometrist: a healthcare professional who diagnoses, manages and treats vision disorders and eye disease. After graduating, I worked in the paediatric and squint clinics of a Beirut hospital. Wishing to expand my expertise, I joined Caledonian as a masters student with a focus on paediatrics, ocular disease, squints and therapeutics. I saw Phelophepa as an opportunity to practise my new skills and do medical voluntary work for the first time in my life.

Life on the rails

I joined the train in Klerksdorp, a city in the North West Province, where I was welcomed by employees and volunteer workers such as Sebenzele, a registered optometrist giving her services for two months. She spoke isiZulu and English, two of the 11 official languages of South Africa. With an understanding of seTswana, xiTsonga and isiXhosa – dominant languages in other provinces such as the Eastern Cape and Limpopo – she was also able to help with those who did not speak English or isiZulu.

My first day began at 7.45 am, with almost 150 patients waiting for an ocular exam. Some had slept by the train the night before to make sure they got a good spot in queue. Patients were seen by an optometrist first, then sent to the pharmacy clinic for drops, or the optician team for glasses, or referred to the nearest hospital for surgery. I was assigned to the optician team where glasses were dispensed on the spot – sometimes replacing spectacles that were decades old.

The next morning I headed to a local primary school for an ocular screening. One child I examined had multiple chalazions – lumps on the eyelid caused by blocked oil glands. Another child was referred with suspected glaucoma, a sight-threatening disease from which black people are more at risk.

Even though I’d spent two years as a hospital optometrist in Beirut, examining patients on the train was a whole new experience. The exam consisted of a vision test using a printed E letter reading chart and an ophthalmoscope to examine the back of the eye and the optic nerve. The latter is usually performed in dim lighting to allow maximum view of the eye through the pupils. However, due to insufficient indoor cubicles, most of the patients were examined in sunlight.

Performing this exam on elderly patients was particularly challenging. Many had dense cataracts – lens opacities caused mainly by age – that prevented a clear view of the eye. These cataracts cause very poor vision and most patients were given glasses while waiting for surgery. A lot of the patients on the train also suffered from conjunctivitis – dry, itchy eyes – for which I was able to prescribe eye lubricants and anti-allergic and antibiotic drops.

Whenever we went, people were so grateful to have access to proper healthcare, and constantly thanked me even when there was nothing I could do except refer them to a hospital. It felt good to be able to help people and make a difference with simple treatments that are readily available to most of the world. In places like this, receiving eye treatment can help people provide for themselves and their families instead of having to rely on others; it also means a child can go to school and learn to read.

In many ways the South African people helped me more than I helped them. Volunteering on the Phelophepa train did not just strengthen my clinical skills such as carrying out ophthalmoscopies and prescribing independently – it was also my first volunteer experience and affected me profoundly and positively. I had to practise in unorthodox settings without access to the usual clinical tests and equipment, working with what I had and relying on my own skills to diagnose and manage patients.

Giving something back in this way makes us better, more resourceful and more compassionate people. I left South Africa with more appreciation of what I have and with a new perspective on life. But most of all it helped me develop and sharpen my skills, and to see what is possible when people come together to improve the quality of life for others.